Action movies are those types of films in which a warrior or hero or a leader involves into a
a series of challenges that include violence, fighting, physical feats, and violent chases.

Action movies revolve around the plot that a person, generally a hero, sometimes a villain,
struggles against an incredible situation including life-threatening or chasing something which generally concludes the victory of the hero at the end.

One can easily conclude that in most of the action movies, the tragic and violent scenes are due to the opposite gender. 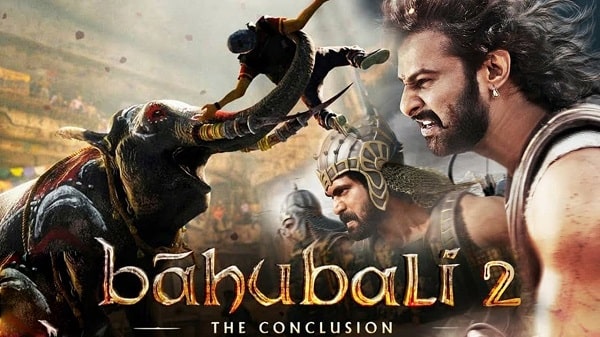 Bahubali is a epic action movie directed by S.S. Rajamouli and produced by Prasad Devineni and Shobu Yarlagadda.

The film follows shivudu, an adventurous young man who falls in love with a fair maiden. While trying to woo her, he helps her rescue Devasena, the former queen of mahimahi who is now a prisoner under the tyrannical rule of king bhallaldeva. he learns about the conflict-ridden past of his family and his true legacy.

Bahubali 2 is the sequel of Bahubali: The Beginning, which is known to be one of the most popular Bollywood action movies. The movie was one of the most awaited movies of Bollywood. The film follows the sibling rivalry between amarendra baahubali and his brother bhallaladeva. He later conspires against his brother and has him killed by kattappa after learning that his father was brutally killed by bhallaladeva, shivudu raises an army to take his revenge and release his mother from the bhallaladeva’s captivity.

The cast of bahubali series:-

Bahubali was The movie starred numerous characters out of which some of the famous stars are Prabhas, Rana Daggubati, Tamannaah, Anushka Shetty, Ramya Krishnan, Sathyaraj, and Nassar.

This is an epic of all time. A mythological one that blew everyone off. The war scenes are breathtaking that creates curiosity and anxiety amongst the spectators. The protagonist were tremendous. These were fun-loving films filled with excitement, drama, romance, aggression and much such emotions. Overall this movie is awesome, very few movies can match up to its excellence.

These movie were made with a budget of  430 crores and they earned 2461 crores in Box Office Worldwide. This is the highest-earning action movie series of India. 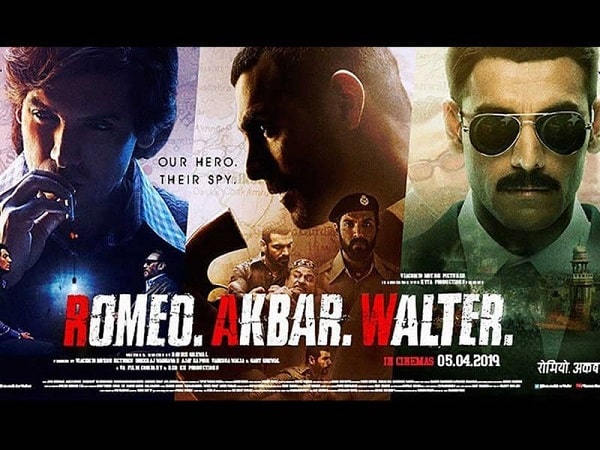 Romeo Akbar Walter is a Bollywood action movie that can also be there on the list of thriller movies. The movie was directed as well as written by Robbie Grewal. The trailer of Romeo Akbar Walter earned huge appreciation from the audience and people were patiently waiting for the movie.
The whole plot of the movie revolves around a banker (John Abraham) who works as an undercover agent in Pakistan. There, he faces numerous emotional as well as physical challenges. The movie is a complete blast of action scenes.

The cast of Romeo Akbar Walter:-

This movie should be watched by every Indian citizen, we should know how intelligently our army and agents work. John Abraham, he is phenomenal for being having a lead role in this movie. There is a lot of suspense in the movie.

Romeo Akbar Walter has a budget of 35 crores and collected 54 crores at the worldwide box office. 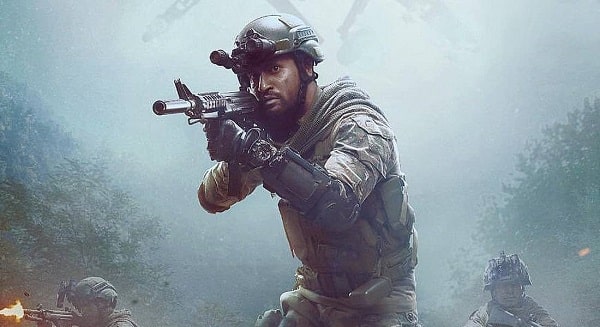 Uri: The Surgical Strike is one of the most loved military action movies of the Bollywood industry. This movie is completely based on true events. Aditya Dhar directed the movie and Ronnie Screwvala produced it.

The plot is dramatized account of the retaliation to the 2016 Uri terrorist attack. Major vihaan Singh Shergill of the Indian army leads a covert operation against a group of militants.

The cast of Uri: The Surgical Strike:-

The released date of Uri: The Surgical Strike:-

Review of Uri: The Surgical Strike:-

Uri: The Surgical Strike is the best and smartest war movie ever made in India. Those frequent handheld camera movements, those never before seen visual effects with long-range sniper attacks and above all, no unnecessary emotional drama but superfast paced cold-blooded and gripping war flick.

Collection of URI: The Surgical Strike:-

The movie was made with a budget of ₹25 crores while it earned around ₹342.06 crores in the box office. 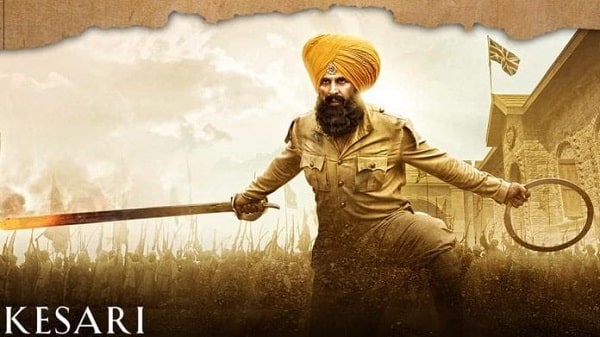 The meaning of the word Kesari is Saffron. Kesari is an epic Indian historical action-war film that was written as well as directed by Anurag Singh.

The movie summarises that Havaldar Ishar Singh ( Akshay Kumar) fights and protects the Indian Sikh Regiment against the 10,000 Afghans invaders with his other Sikh members until their last breath. However, what unfolds is the greatest last stand wars of all time.

The cast of Kesari:-

Kesari is the rousing patriotic film. But it is a lot more than that and definitely deserves a watch. The dramatic battle sequence as its USP.

The movie was made with a budget of INR 80 crores and it earned a total of INR 207 crores in the box office. 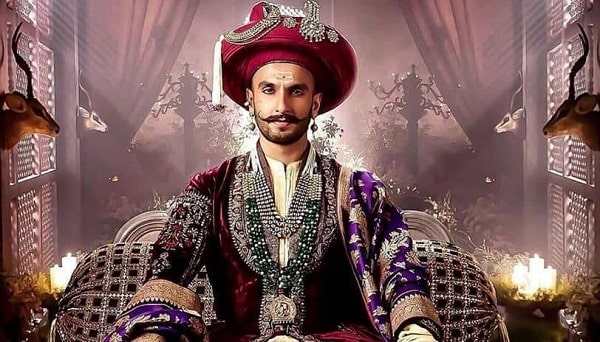 Bajirao Mastani is an Indian historical action-romance film that was directed by the exceptionally talented, Sanjay Leela Bhansali. Sanjay Leela Bhansali and Kishore Lulla produced it.
The movie represents a warrior named Peshwa Bajirao (Ranveer Singh) who is a married person but falls in love with a woman of a different religion. They struggle to make their love triumph amid opposition from his conservative family. Bajirao’s mother refuses to accept her as a daughter in law. Bajirao later leaves for the battlefield to defeat Nasir Jung, the vengeful son of the Nazim. Once Bajirao leaves, his mother and son imprison Mastani and her son. After Bajirao receives the news, he singlehandedly defeats Nasir Jung’s army in his rage but is fatally injured.

The movie was released in the year 2015.

Bajirao Mastani was made with a budget of INR 145 crores while it earned a total of INR 356 crores worldwide.

6.  Holiday:  A Soldier Is Never Off Duty 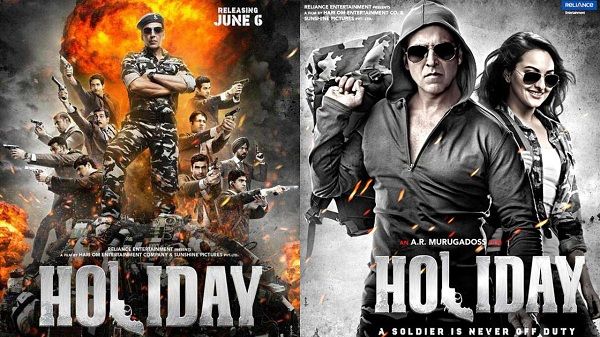 The holiday is an action thriller Bollywood movie released in 2014. The film was written and directed by A.R. Murugadoss. It was produced by Vipul Shah. The film starred Akshay Kumar and Sonakshi Sinha as lead roles including Farhad along with Govinda as a special appearance.

The film came to be a revolution in the life of Akshay Kumar in the context of choosing films having better content. He was also nominated for the best actor in the 60th Filmfare Awards.

The plot of the story revolves around the content that Akshay Kumar starring as VIRAT BAKSHI, who is an agent of D.I.A and a cadet of army returns his home, Mumbai where he finds immense violence including sleeper cells and he tries to remove them from their root.

In the end, he gets success in doing so meanwhile he gets trapped in the love of Sonakshi Sinha starring as Saiba Thapar.

Best songs of Holiday:  A Soldier Is Never Off Duty:-

The cast of Holiday:  A Soldier Is Never Off Duty:-

Released year of Holiday:  A Soldier Is Never Off Duty:-

Holiday:  A Soldier Is Never Off Duty was released in 2014

Review of Holiday:  A Soldier Is Never Off Duty:-

This is one of the finest action movies ever made in India especially when Akshay Kumar jumped from one wall another without using any body double. Not only does the film have some of the best thriller moments, it also features mindblowing action sequences and pays a wholehearted tribute to the army and their families.

Collection of Holiday:  A Soldier Is Never Off Duty:-

The film had a budget of 30 crores and it earned 178 crores in the box office. 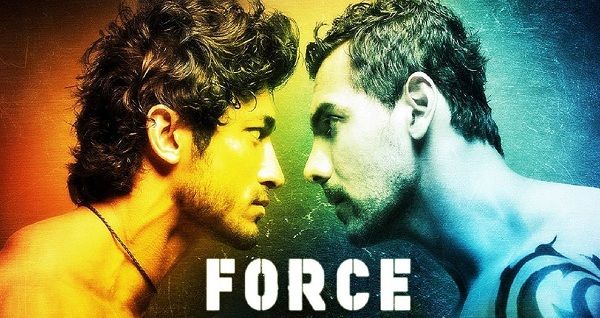 Force, an Indian action-thriller film series. The first film was directed by Nishikanth Kamath and it was produced by Vipul Amrutlal Shah.

The second part was directed by Abhinay Deo and produced by John Abraham himself. The part has started its production.

In the movie, John Abraham acting as D.C.P Yashwardhan is a dutiful and responsible officer working for N.C.B (narcotics crime bureau).Yashvardhan kill a drug dealer, Vasu. But his vengeful brother, Vishnu, a dreaded gangster, vows to destroy the DCP’s life. DCP tried to remove terrorism from the city and succeeded to do so despite losing his life.

In the second part, he still wants to work for his nation and so he joins R.A.W as a spy working in Budapest. There he teams up with RAW agent Kamaljit Kaur to expose an inside informer who leaks sensitive information to a foreign agency targeting the RAW agents.

The cast of force series:-

A classy spy film plot made with an all-Indian team. Though cheesy at times, these movies does bring in a fresh breath to a dated genre. Both the films are action-packed. No doubt about it. Expect lots of bullets and gunplay throughout.

Both the films had a budget of 57 crores and earned 90 crores in the box office.

Both the parts starring SHAHRUKH KHAN as DON in the lead role in which he acted as an elegant, a criminal having a blasting attitude. The second part continues the first one.

Both the films were ruling the box office because of the film content as well as the stardom of KING KHAN.

Actors acting were superb. This series is great. Climax scenes were brilliant and Don’s laughing style. 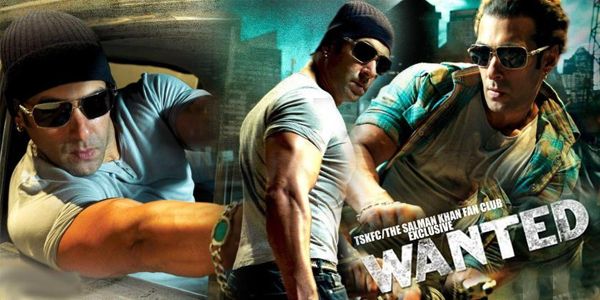 The film was directed by Prabhu Deva and it was produced by Boney Kapoor.

The plot of the movie revolves around the fact that Salman Khan acting as Radhey, is a criminal but in the end, it is revealed that he is actually a police officer and currently is an undercover agent. He kills the villain and ends the film in a swaggy way.

The film starred Salman Khan as the lead role and Ayesha Takia as a heroine. Prakash Raj acted as a villain in the film.

Wanted was released in 2009

This movie is undoubtedly the most entertaining movie of 2009. A film that changed Salman’s career forever. Hats off to Salman Khan. He definitely looks like a ferocious lion. The pace of the movie is the important thing to notice about. It will make you to watch the movie for more time.

The budget of the film was 50 crores and it earned 127 crores in the box office. 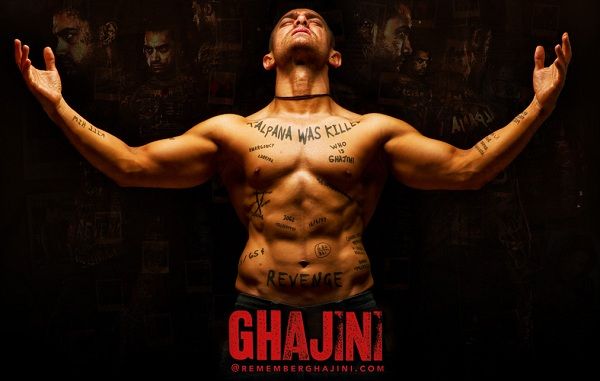 Ghajini is an Indian action-thriller movie. The film was written and directed by A.R Murugadoss. It was produced by Allu Aravind.

The film starred Aamir Khan in the lead role as Sanjay Singhania. Asin acted as Kalpana who was Sanjay’s love. Jiah Khan acted as Sunita who is a medical student who is studying the human brain with her friends.

The plot of the film is that Sanjay Singhania is a successful, rich, and kind-hearted businessman.

He falls in love with a common and simple girl but a man named Ghajini killed his lover and shot him in hear with an iron rod due to which he goes through short-term memory loss. In the end, he kills him and takes his revenge.

Ghajini was released in 2008

One of the best action movies in Bollywood. This movie isn’t all about power-packed action revenge but it has got truly heart-melting feelings which will surely bring down your tears. A great mind-blowing powerful performance by Amir Khan.

The film had a budget of 65 crores and it earned 232 crores.